Ediciones Destino or Edicions Destino was created in Barcelona in 1942. Joan Teixidor, Ignasi Agustí and especially Josep Vergés were its founders. It initially published in Spanish, and in 1946 it began to publish in Catalan.

This collection joined the Biblioteca de Catalunya after being purchased from the heirs in 2006. It includes materials from the "Destino" archive, along with manuscripts and photographs of Josep Pla and himself.

Press release announcing the acquisition of the Josep Vergés collection

More information and documentation on the works produced 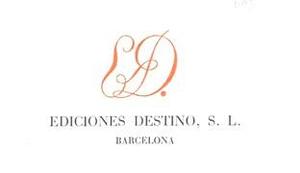 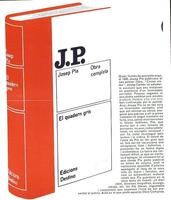 Ediciones Destino or Edicions Destino was created in Barcelona in 1942. Joan Teixidor, Ignasi Agustí and especially Josep Vergés were its founders. It initially published in Spanish, and in 1946 it began to publish in Catalan.

Novels, essays, memoirs and history books werethe main genres it published, which are grouped into collections and awarded with prizes created by the publishing house, including the Premi Nadal for Spanish-language Novels, the Premi Josep Pla for Fiction and the Premi Apel·les Mestres for Children’s Literature. Later on, it also started to publish illustrated works, art books and the complete works of Josep Pla, one of the emblematic products of this imprint. In 1989, Josep Vergés stepped down from the helm when Planeta purchased 50% of its shares, and in 1996 it ended up absorbing the company entirely, although it kept publishing under the Destino imprint. In 2001, Joaquim Palau was appointed literary director to replace Andreu Teixidor, and five years later, in 2006, Emili Rosales replaced Joaquim Palau.

It published most post-war Spanish novelists and the most renowned literary authors from around the world, as well as contemporary Catalan authors.

In line with the genres and themes published by the imprint, its entire output was grouped into collections. Prominent collections include Áncora y Delfín, the Obra Completa de Josep Pla (Complete Works of Josep Pla) and Grans Llibres Il·lustrats.

Much of Destino’s output is fiction and essays, although it is also known for its illustrated works and art books.

Advertising card for the novel Nada by Carmen Laforet, the winner of the first Premi Nadal.

Advertising leaflet for the Guia de la Costa Brava by Josep Pla, with illustrations and photographs.

Cover of Nada by Carmen Laforet and La sombra del ciprés es alargada by Miguel Delibes (winners of the Premi Nadal in 1944 and 1947) and Onades sobre una roca deserta by Terenci Moix (winner of the Premi Josep Pla in 1968).